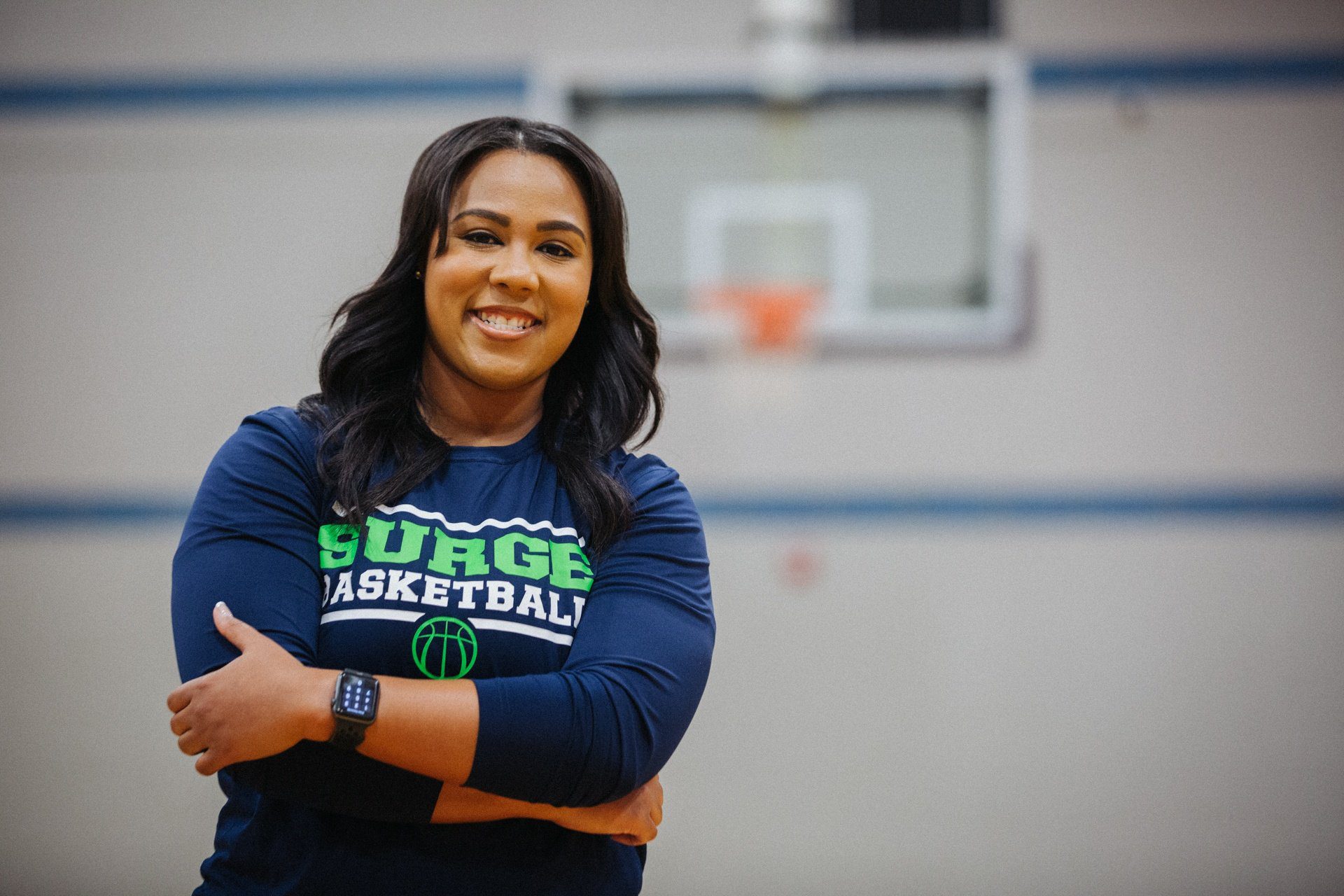 “We've built a professional team and market that the city can be proud of,” says Khalia Collier, owner and general manager of the St. Louis Surge.

“Kristi, will you join this group over here?”

“Can you do a layup for me, Brittany?”

There’s a cacophony of voices as players from the St. Louis Surge basketball team are pulled into different photo shoots during the team’s media day. In one corner of the court, players pose with basketballs under their arms. In another, a pair jokes as they dribble toward a photographer. Ready to kick off the 2019 season, the women obviously are in high spirits.

Khalia Collier surveys it all, excited for what this season could mean for St. Louis and for the sport. As the Surge’s owner and general manager, Collier has watched her team find its footing in a city that tends to focus on baseball and hockey. When she took over the Surge in 2011 — becoming one of the youngest owners in the country at age 23 — many people insisted that she wouldn’t be able to entice St. Louisans to watch basketball, let alone watch women play it.

But the Surge frequently draws thousands to the Washington University Field House, scores 94 points per game and goes undefeated in the regular season. With two national championships and multiple regional titles, the team will celebrate its 100th game during the home opener on June 8. It’s quite a milestone in St. Louis, a city that hadn’t seen professional basketball in decades.

Surge owner and general manager Khalia Collier is adamant about supporting women with meaningful opportunities. “You realize that the pie just gets bigger and you can give out as much as you want.”

Coming out on top after being underestimated means everything to Collier and these athletes.

“Everyone anticipated that we would fold. But we’ve set a foundation, and now it’s time to keep building. I knew that instead of everyone always focusing on bleeding red or blue, we could create another color in the mix. Now Surge fans bleed green,” Collier says.

“We’ve built a professional team and market that the city can be proud of, that our community can get behind, and that creates opportunities for the women who are part of our program and for the next generation that wants to see how sports is built from a different perspective.”

For 2019, the Surge enters a new league — the Global Women’s Basketball Association, a competitive league that aims to develop and propel post-collegiate and post-amateur athletes towards careers in the WNBA. Collier says that this level of paid professionals had been lacking in women’s basketball, with talented players often heading overseas for opportunities or wrapping up their careers too soon. But the GWBA, which began in 2016, offers new challenges to the overabundance of talent, enticing athletes to stay in the United States and build supportive networks as the league grows in strategic markets.

Collier says that the Surge’s careful, businesslike approach to nurturing a team and its fan base — which is expected to break record attendance in 2019 — has contributed toward the GWBA’s new growth.

“We’ve been on an island by ourselves for too long and we can’t grow without a league that’s competitive,” Collier says. “You’re seeing individual markets do what we’re doing here in St. Louis, so now we’re able to share across markets and speed up the success of other teams. It just elevates everyone at the same time.”

A Surge player’s talent is important, Collier says, but so is what they do off the court. To boost an athlete’s post-career options and to strengthen the St. Louis community, Collier requires athletes to have a bachelor’s degree, and many players end up pursuing master’s degrees during and after their time on the team. Collier, a St. Louis native, also helps players connect with local corporations and resources that offer additional career choices, and athletes typically dive into meaningful volunteer opportunities.

“You have to be a part of the community. You have to like kids. You have to want to volunteer,” Collier insists. “And that is the determining factor of getting them to move here. When you have a good network, you have resources and you have people who have your best interests at heart, you fall in love with the city.”

Selling St. Louis is important to Collier’s recruitment process. Collier finds plenty of basketball talent throughout the region, but she also recruits many athletes from around the country to play and live in the Gateway City. And after eight seasons under Collier’s watch, many of those women have chosen to stay in St. Louis, even when their playing days are over, instead of returning to their home states — remaining in St. Louis to buy homes, find jobs and support community initiatives.

“I wanted to know everything, not just about the game of basketball, but the business of sports in general. I felt like I was built for this,” Khalia Collier says.

“That’s what makes people stay — providing opportunities and an environment that fosters their success,” Collier says. “They’re already talented at the game of basketball. Instead of waiting until one stops before the other, here’s your career path at the same time.”

“It’s refreshing to be so intentional about uplifting other women and to provide that kind of network and support. It’s a win-win,” she continues. “The more successful they are, the more successful we are. You realize that the pie just gets bigger and you can give out as much as you want; the more you give out, the more rewarding it’s going to be for me in the long run and the more success stories that they have. They become their own alumni network.”

Basketball is in Collier’s blood, having grown up playing the sport with her family before taking things to the college level. Enjoying both the camaraderie and the competition, Collier stoked a fire within herself that can’t be snuffed. She graduated from Fort Zumwalt South High School with the attention of plenty of college recruiters.

“I think everyone’s aspiration as a kid is ‘I could possibly play pro one day,’ so that was definitely me,” Collier recalls. “I remember being in love with Space Jam, being obsessed with Michael Jordan, drinking blue Powerade before my basketball games and thinking that I could one day be in the NBA. I just wanted to play at the professional level.”

After studying communications and political science at Columbia College and later at Missouri Baptist University, Collier jumped straight into the corporate world. But basketball was never far from her mind, and she soon became the Surge’s team manager. Discovering a new desire to foster a team of her own, Collier purchased the Surge in 2011, kicking off a new era for championship women’s basketball in St. Louis.

“I had no idea what I was getting myself into, truly. I just knew that I would give it everything that I had and I could do it better than before and insert my own ideas and creativity,” Collier says. “I started researching every team that came through the St. Louis market that had been successful or that folded. I wanted to know everything, not just about the game of basketball, but the business of sports in general. I felt like I was built for this.”

Building her team upon strategic business projections for year one, year three, year five and beyond, Collier and the Surge have surpassed all expectations. She attributes some of her success to being a lifelong competitive chess player, an interest stoked by her father and grandfather.

“I was in chess club growing up, so it’s paired with me with being an athlete. I think it molded me — it’s really creating as many options for yourself and creating the best avenue that makes sense for you,” Collier says. “That’s how I’ve really gone about just life in general. I’m trying to be as strategic as possible.”

“When you have a good network, you have resources and you have people who have your best interests at heart, you fall in love with the city,” Khalia Collier says.

Thinking about the future for the Surge and the GWBA, Collier can see the payoff from all the strategy and hard work. She also notices other visionaries making their mark in St. Louis and providing opportunities that weren’t there before.

“I’m seeing a lot of amazing things, but they’re in pockets, and that’s what has to change,” Collier says. “But now all these different entrepreneurs are coming in, and it becomes more reflective of what the rest of our country looks like, to include more people of color, to include more opportunities for entrepreneurs of all walks of life who want the same opportunity.”