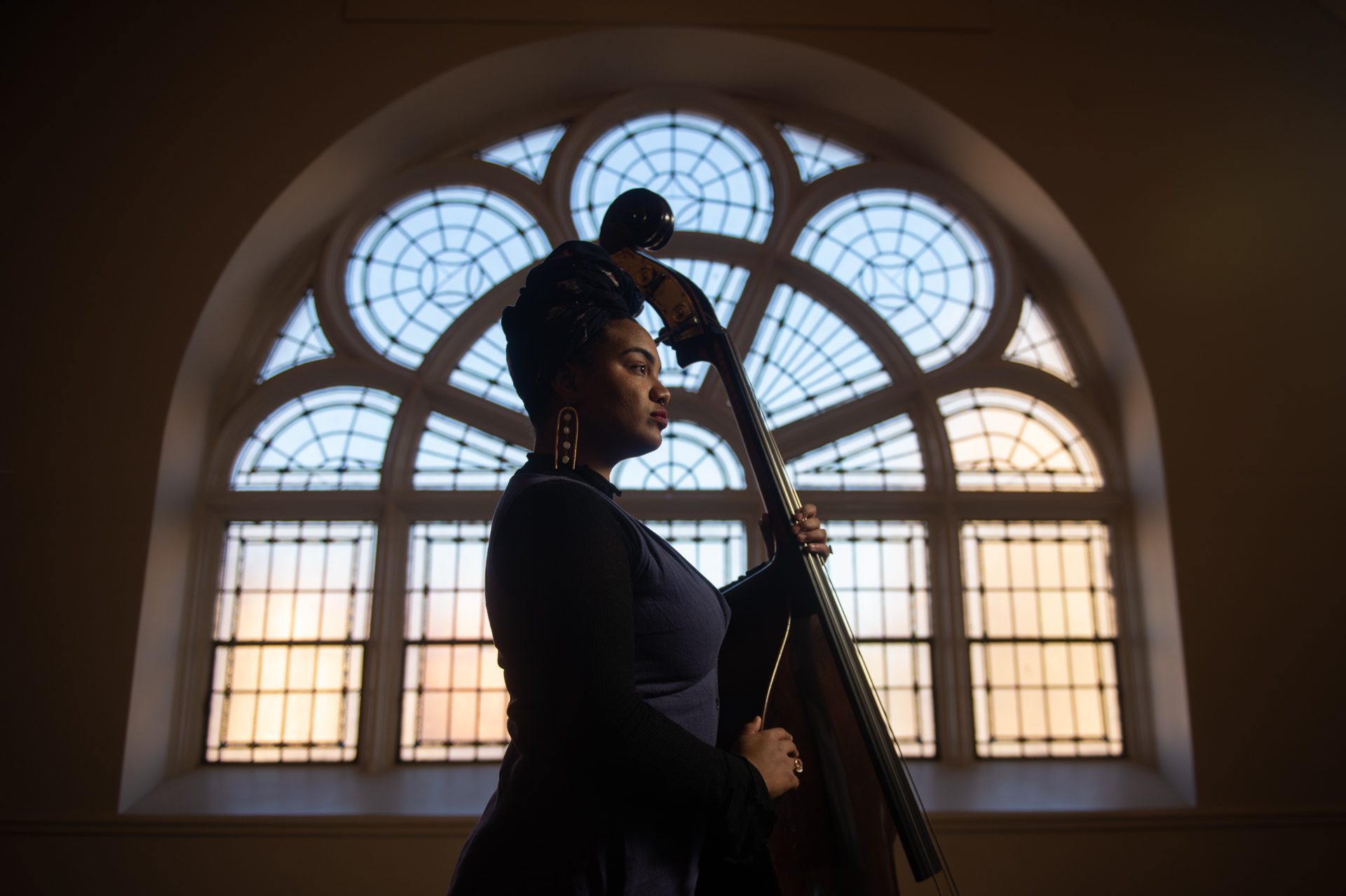 The Dark Room is a funky, friendly and – not insignificantly – free jazz oasis situated at the front of the Grandel Theatre in the Grand Center Arts District of St. Louis.

The bassist and vocalist, known professionally as simply Tonina, played the Dark Room once a week as a Kranzberg Arts Foundation Musician in Residence last year. With other demands on her schedule these days, the frequency has gone down to about once a month. Still, returning here feels natural.

Upstairs in the Grand Hall, a room with high vaulted ceilings and decorative leaded-glass windows, Tonina cradles her bass, eyes closed, playing and humming a few repetitive, descending notes while a photographer snaps away.

It’s a slow afternoon for Tonina – something that may be in short supply soon. One senses that the St. Louis native is gearing up for her Big Moment.

Former U.S. President Barack Obama might agree, as he recently placed her song “Historia de un Amor” alongside tunes by national artists Janelle Monae, Cardi B, Hozier and H.E.R on his 2018 year-end playlist. After Tonina learned about the news from friends tagging her on Obama’s Instagram post, digital play counts for the song and for her album “Black Angel” have ticked upward.

Still awed by the out-of-the-blue honor, Tonina admits that the admiration is mutual.

Tonina Saputo connects with her audience at the World Chess Hall of Fame.

“Not just because of all the things he’s done, his presidency, but because he speaks on issues that I truly believe in,” she says. “And also, who he is: He’s half-African, half-white, like I am. He looks like me. We come from similar backgrounds. I’ve always been a fan, especially as a speaker and his values. So it hit extra hard.”

Being name-checked by a former world leader understandably is high praise for someone who has made music her life’s focus. Tonina began playing the bass at age nine in Kirkwood, where scholarships provided her private lessons with members of the St. Louis Symphony. She later became a member of the Missouri All-State Orchestra and the St. Louis Symphony Youth Orchestra, where she was a section leader – and the experiences have stuck with her.

“The best feeling I’ve had in music ever is playing with a symphony,” she says.

Later, Tonina studied at Berklee College of Music, which took her to Valencia, Spain, where she worked with Grammy-winning producer Javier Limón. Limón would go on to produce Tonina’s “Black Angel” album and release it on his Casa Limón label.

She’s performed around the world and regularly is asked to play festivals throughout the United States, but Tonina acknowledges that there’s something special about performing in St. Louis.

“The Dark Room, specifically has been great,” she says. “Catching free music and giving these artists a place to perform – it’s super meaningful to the musicians around town. It’s very rare that you’re going to find a jazz club that’s free, especially in any other city. But we have it here.”

Tonina regularly makes her way through St. Louis’s venues. A week earlier at the World Chess Hall of Fame in the Central West End, she captivated a capacity crowd, performing songs in English, Spanish and Sicilian – a mix of originals along with covers by the Jackson Five (“I Want You Back”), Outkast (“Hey Ya”), and Nirvana (“Smells Like Teen Spirit”).

Tonina’s own songwriting, she says, is a work in progress. “I’m still in the process of getting over my insecurities with my songs. I want people to like them,” she shares, noting that more and more, she is finding her comfort zone. But she’s already landed there when it comes to choosing covers. “I just have to love the song,” Tonina says. “I like bending it in ways that you wouldn’t think  – like, turning Nirvana into a jazz tune is just weird.” But somehow, she finds, it works.

A student of history and a variety of musicians, Tonina Saputo is known for covering songs by Billie Holiday and Nirvana.

One cover song that means a lot to her is “Strange Fruit” – “written by a Jewish guy [Abel Meeropol, a.k.a. Lewis Allen] and sung by Billie Holiday,” she notes. It’s a powerful song, forged in response to racism and lynchings in the American South, and it demands rapt attention. “If you’re going to talk over any of my songs, just not that one, please,” Tonina says.

A sense of history informs Tonina’s life and work, and she drops thoughtful, knowing references to Holiday, Josephine Baker, James Baldwin and Emmett Till into conversation.

“I’m a huge believer in [the notion that] you have to know your history to know where you’re going,” she says. “My father was born in 1945, my mother in 1951. I’m fascinated with having immigrant grandparents, with their experiences, and the juxtaposition of my mom being a presenting white lady [she’s of Sicilian descent] and then my dad [a black man] being, like, hosed down in the streets.”

Tonina also appreciates the music education her parents provided. It was her father’s love of Nat King Cole’s Cuban-inspired “Cole Español” album that led her to record a number of the tracks on “Black Angel” in Spanish.

“One of my dreams is to become the Nat King Cole of this generation,” she says.

Tonina is helping local musicians realize their own dreams, too. In addition to crafting her own songs, she’s the music director at St. Louis community radio station KDHX, where she connects with record labels, books artists for in-studio appearances and assigns content for the station’s music blog.

“It aligns with my personal goal to put artists on and get this city recognized,” Tonina says. “Like, let’s talk about these people who are doing amazing things, making beautiful art in this city.” She counts electronica artists Syna So Pro and Bloom, indie rockers Yuppy, pop classicist David Beeman and rapper Mvstermind among her current crop of favorites in the Gateway City.

Tonina Saputo poses with her upright bass “Chauncey” at the Dark Room at the Grandel.

But back to Tonina, there’s still one obvious question: Why choose the upright bass?

“It’s the vibrations and the frequencies produced by the instrument. You feel it in your chest,” she reflects. “And like, sometimes if I have a headache, I like to play my E string and put my head against it and my headache feels better. It’s the actual physical feeling it gives me while playing.”

Tonina even has given her bass a name: Chauncey.

“Because I’m with him every day, I feel like we have a relationship,” she says. “He’s seen me in every emotion and been there through every awful concert, every great concert. He’s been through it all.”

“The best feeling I’ve had in music ever is playing with a symphony,” Tonina Saputo says.