When theSTL.com team first started working on this story on the artist Mee Jey, it was only weeks ago — but it was also a lifetime ago, before the coronavirus and social distancing were impacting all our lives and dominating nearly every conversation. While we had planned to highlight Mee Jey’s art and her experience as an Indian immigrant in St. Louis, her story and her art have changed shape.

“It’s a difficult time for everybody — financially, personally, emotionally,” she says, relaying that her workplace has closed, and an event that she had been invited to speak at has been canceled.

Mee Jey’s situation is further complicated because of her visa status — her visa allows her only to work within her field, and since she’s no longer working, she will need to return to India to apply for a different visa. She has booked a plane ticket to go to India in April to fill out the necessary visa paperwork, but she doesn’t know if India will be allowing travelers from the United States to enter the country.

Moving to St. Louis was never part of the original plan for Mee Jey. In 2013, Mee Jey, whose given name is Meenakshi Jha, and her husband, Jey Sushil, began traveling to other cities within India, working on art projects with the people in those communities. They would pack up a pair of clothes and their art supplies, hop on a motorcycle and go where they were needed or requested. The couple typically would stay with a host and usually would work on their community art projects for free, inviting bystanders to participate and create the artwork together.

For this, Mee Jey and Jey Sushil coined the term “Artologue.” They created a website and began writing about their experiences, documenting the dialogues they were creating and the relationships among art, artist and audience.

Mee Jey works on one of her large recycled-fabric pieces.

Artologue caught the attention of a professor at Washington University in St. Louis, who encouraged Mee Jey — then living in New Delhi — to apply for the McDonnell International Scholars Academy and bring her family and her artwork to the Gateway City.

While Mee Jey previously had applied to work abroad, she had never considered St. Louis, or even the United States, for that matter. And because she had been turned down for other programs, she thought Washington University was out of the question.

“St. Louis is a very inviting community,” Mee Jey says. “It lets you in; It considers you part of this community. And this helped me feel at home even though it’s seven oceans far from my world.”

When Mee Jey began her daily portrait series in January 2019, she never imagined it would be a tool to record and process life through a pandemic. But that is what it has been for her lately. She writes a note to accompany each piece; March 13’s message is “Psychological stress. Living in uncertain times.” Her message for March 22 is “5 continents. 3,28,500 affected. 14,496 deaths. 157 countries.”

They’re sobering thoughts. But as an artist, Mee Jey is drawn to exploring and documenting what she observes.

And of course, one of the ways to cope during a stressful time is humor: her piece on March 24 is titled “World Map.” It’s a sketch of the layout of her family’s apartment.

“I am forcing myself every day to come up with a new idea about the same panic, the stress, the crisis, the limited resources that are imposing on us. It’s about how you can look at something in a different way,” says Mee Jey.

Mee Jey’s creativity with a lack of resources is also reflected by the materials she works with. “When you have no option, you do your best to make do with whatever is there,” says Mee Jey. “It’s why I started working with recycled materials, because it’s whatever you are left with. It became a part of my larger philosophy.”

“Art is for everybody, because that is the function of art -- to make our lives better, to create a dialogue with us and the world,” Mee Jey says.

Some of Mee Jey’s most striking work are what she calls “aliens,” crafted out of donated fabric scraps that she’s twisted and shaped into colorful sculptures. They’re named for and inspired by her experience as an immigrant.

“My political identity in the United States is ‘nonresident alien.’ And that infuriated me, because how can you call me an alien? Well, I am a human being,” she asserts.

“And that was when I started creating all these abstracted human forms. And the more I got to know about the political tensions around immigrant population in the United States, the more engaged I got with this subject,” she continues. “So when you say my work started from my identity as an immigrant, as a mother, as a student, as a student with scarce resources, it moved on to get more and more political.”

Mee Jey’s sculptures of twisted recycled fabric tell stories about those who donated the material, about the artist herself and about the immigrant experience.

Worrying About What You Can’t Change

The portrait Mee Jey completed on March 23 is a foam heart with pieces carefully cut out of it. Each piece is a symbol of something her family can all do now that they are homebound. In creating this piece, she wondered, “When it’s time to shut inside, can you reconnect with yourself? Instead of worrying about things that can’t change, can you look into yourself and connect with all the things you were not thinking about when you had the outside world?”

A challenge for all of us, now and in the days ahead.

Mee Jey and her husband Jey Sushil travel around the world for community art projects, documenting their work at artologue.in. 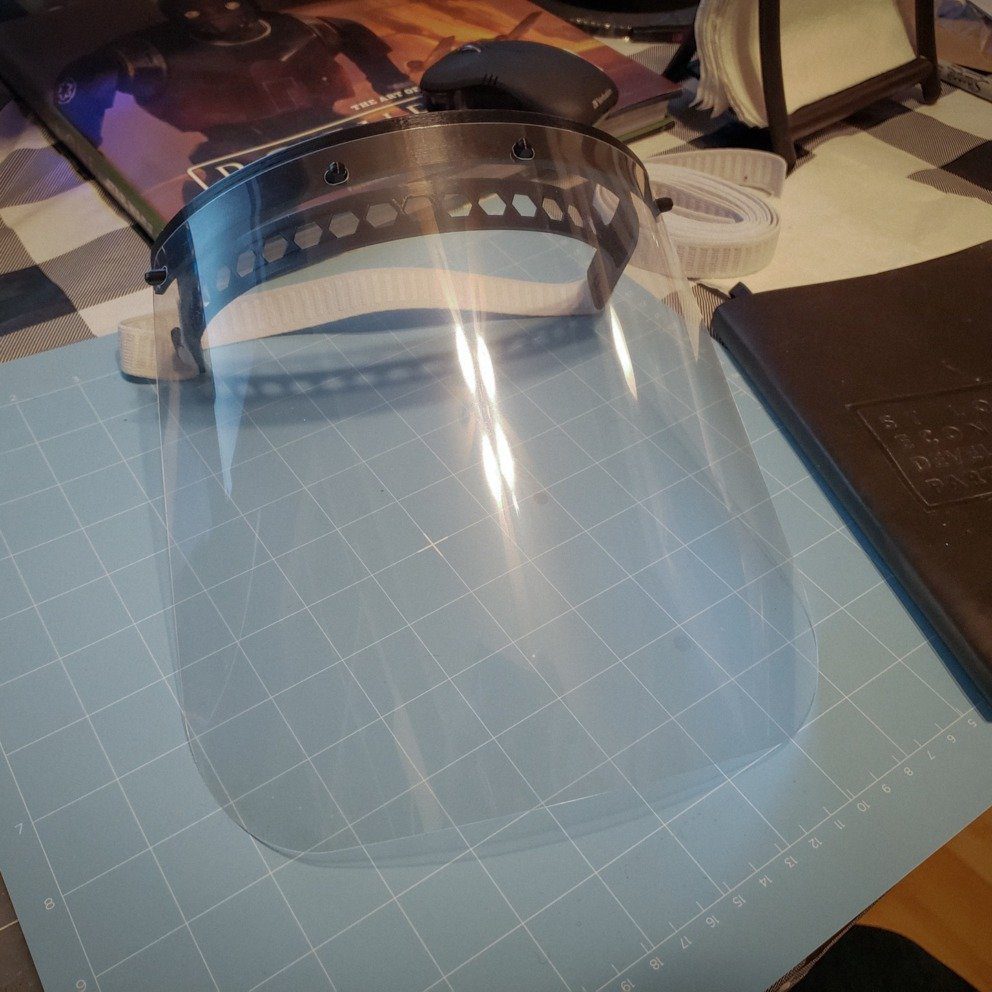